Why visit Europe? The 10 Best Places to Visit in Europe 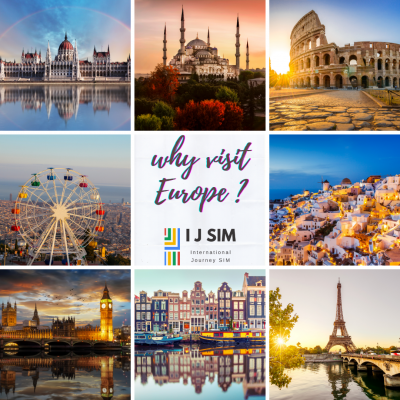 Europe is known for its fascinating history, stunning architecture, and diverse cultures and languages. Europe is perhaps the world’s most visited region, drawing tourists from across the globe to experience everything from Italian cuisine to Spanish flamenco. From England and France to Italy and Germany, European countries are full of vibrant cities known for their museums, restaurants, nightlife, and architecture. So, deciding which spots are the best places to visit in Europe can be difficult. So here are the 10 Best Places you can visit in Europe.

The 10 Best Places to Visit in Europe

Paris is the capital and most populous city of France. Paris is a global center for art, fashion, gastronomy, and is known for its cafe culture. no trip to the city is complete without a little sightseeing which includes

Did you know that the whole complex of Santorini islands is still an active volcano and probably the only volcano in the world whose crater is in the sea? Crescent-shaped Santorini (or Thíra), the precious gem of the Aegean, is actually a group of islands consisting of Thíra, Thirassiá, Asproníssi, Palea, and Nea Kaméni in the southernmost part of Cyclades.

Amsterdam is the Netherlands’ capital, known for its artistic heritage, elaborate canal system, and narrow houses with gabled facades, legacies of the city’s 17th-century Golden Age.

London, the capital of England and the United Kingdom, is a 21st-century city with a history stretching back to Roman times. At its center stand the imposing Houses of Parliament, the iconic ‘Big Ben’ clock tower, and Westminster Abbey, site of British monarch coronations. Across the Thames River, the London Eye observation wheel provides panoramic views of the South Bank cultural complex and the entire city.

Rome is the capital city and known for its stunning architecture, with the Colosseum, Pantheon, and Trevi Fountain as the main attractions. It was the center of the Roman Empire that ruled the European Continent for several ages. And, you’ll find the smallest country in the world in Rome; Vatican City.

Edinburgh is a city of somber theatricality, with much of this quality deriving from its setting among crags and hills and from its tall buildings and spires of dark stone. Edinburgh has been a military stronghold, the capital of an independent country, and a center of intellectual activity.

Straddling Asia and Europe across the sprawling Bosphorus Strait, Istanbul is a major city in Turkey which is world-famous for its rich history and culture, stunning scenery, magnificent structures, and a plethora of aspects

Reykjavík is the capital city of Iceland, the world’s northernmost capital. Reykjavík has a vibrant cultural and design scene, with plenty of exciting adventure tours, vivid nightlife, modern museums, world-class restaurants, galleries, shops, bars, and clubs for you to explore throughout your stay.

Budapest is the capital of Hungary. Budapest has something for everyone from dramatic history and flamboyant architecture to healing thermal waters and nightlife.  has a massive underground cave system formed by the same geological springs that provide water to the city’s many thermal baths.