Why Visit Asia? 10 best places to visit in Asia 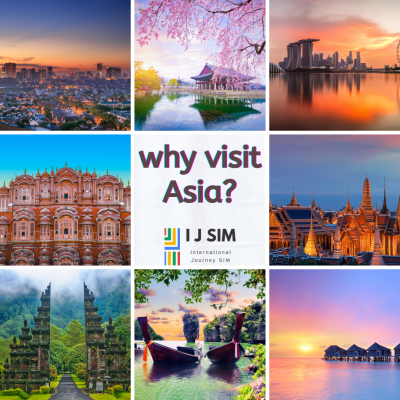 The largest continent on Earth, Asia stretches all the way from the shores of the Mediterranean Sea to the Pacific Ocean. Its vast landmass encompasses everything from epic mountain ranges such as the Himalayas to the dry and desolate Arabian and Gobi deserts. The steamy jungle can also be found in Southeast Asia, as well as paradise islands and beautiful beaches.

From fast-paced, exciting Bangkok and Tokyo to the sensational beaches of Koh Phi Phi or Halong Bay, adventure is everywhere you turn on an Asia tour. Each region is different; with a cuisine, culture and history all just as fascinating as the next.

In addition to its colossal size, Asia is remarkably home to more than half of the world’s population. Colorful Asia has some of the world’s oldest cultures, fascinating architecture, beautiful natural landscapes, delicious foods, and friendly locals.Asia’s many natural wonders and hidden treasures could take a lifetime to unravel. Here are some of the best places that you can visit on your Asia Tour.

10 best places to visit in Asia

The Maldives is a nation of islands in the Indian Ocean, that spans across the equator. The country is comprised of 1192 islands that stretch along a length of 871 kilometers. The Maldives has one of the most delicate environments anywhere on the planet. Although home to just over half a million people the Maldives has its own unique culture and traditions.

Tokyo, Japan’s busy capital, mixes the ultramodern and the traditional, from neon-lit skyscrapers to historic temples. The opulent Meiji Shinto Shrine is known for its towering gate and surrounding woods. The Imperial Palace sits amid large public gardens. The city’s many museums offer exhibits ranging from classical art to a reconstructed kabuki theater.

Phuket province is located in southern Thailand. It is the biggest island of Thailand and sits on the Andaman Sea. The nearest province to the north is Phang-nga and the nearest provinces to the east are Phang-nga and Krabi. Being a big island, Phuket is surrounded by many magnificent beaches such as Rawai, Patong, Karon, Kamala, Kata Yai, Kata Noi, and Mai Khao. Laem Phromthep Viewpoint is said to feature the most beautiful sunsets in Thailand. It isn’t all just beaches though, there is also fantastic classical architecture such as the Goom Restaurant. That and the very welcome atmosphere and the famous Phuket nightlife, you can see why the island is a hotspot for tourists in Thailand.

Bali is an Indonesian island known for its forested volcanic mountains, iconic rice paddies, beaches, and coral reefs. The island is home to religious sites such as the cliffside Uluwatu Temple. To the south, the beachside city of Kuta has lively bars, while Seminyak, Sanur, and Nusa Dua are popular resort towns. The island is also known for its yoga and meditation retreats.

Delectable dim sum, floating islands, and a one-of-a-kind skyline are just some of Hong Kong’s enchanting features. Eat your way across Temple Street Night Market with its fish balls and stinky tofu, or settle in for dim sum at Michelin-starred venues like Tim Ho Wan. For traditional Chinese architecture, head to Ngong Ping Village, then take the tram to the tippity-top of Victoria Peak for skyscraper views. The gentle hills of Nan Lian Garden will deliver serenity, but a detour through the city’s cocktail bars will bring back Hong Kong’s urban buzz.

Bangkok, Thailand’s capital, is a large city known for ornate shrines and vibrant street life. A bustling metropolis with a rich heritage and culture, Bangkok is the gateway to Thai warmth and hospitality. There are glittering temples and grand palaces and also modern skyscrapers and swanky shopping malls; all a testimony to the city’s emergence as a progressive metropolitan keeping its cultural heritage intact. A heaven for shoppers, Bangkok offers the most interesting shopping experiences with its array of weekend and night bazaars, shopping malls, and local markets.

Jaipur is the capital of India’s Rajasthan state. It evokes the royal family that once ruled the region and that, in 1727, founded what is now called the Old City, or “Pink City” for its trademark building color. Jaipur is Known for Hawa Mahal, Jal Mahal, Amer Fort, Jantar Mantar, and several other places to visit, Jaipur has numerous stories to tell.

To enter Singapore is to enter a world of architectural wonders and culinary delights where lush greenery and Eco-Friendly malls coexist in confidence. Here is where friends, families, and lovers come to find themselves and each other in a spirit that transcends cultures and new experiences are created every day Singapore packs a surprisingly massive number of attractions: verdant parks, world-class zoos, luxurious hotels, historical structures, and deliciously cheap eats.

Seoul, the capital of South Korea, is a huge metropolis where modern skyscrapers, high-tech subways, and pop culture meet Buddhist temples, palaces, and street markets. Notable attractions include futuristic Dongdaemun Design Plaza, a convention hall with curving architecture and a rooftop park; Gyeongbokgung Palace, which once had more than 7,000 rooms; and Jogyesa Temple, site of ancient locust and pine trees.

Hanoi, located on the banks of the Red River, is one of the most ancient capitals in the world, where travelers can find well-preserved colonial buildings, ancient pagodas, and unique museums within the city center. A great place to explore on foot, this French-colonial city is also known for its delectable cuisine, vibrant nightlife, silks, and handicrafts, as well as a multi-cultural community that’s made up of Chinese, French and Russian influences.