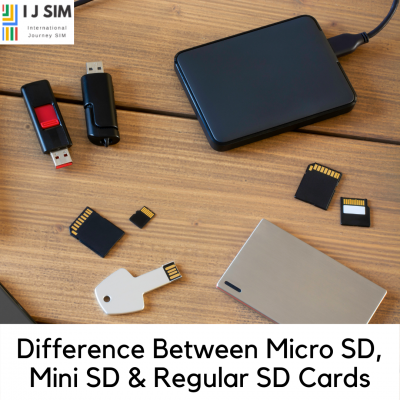 Secure Digital, officially abbreviated as SD, is a proprietary non-volatile memory card format developed by the SD Association for use in portable devices. All types of SD cards are useful for storing documents, media, and other files so that you can transfer them or access them when you’re away from work. Ultimately, the card you use is the one that’s compatible with your device. Most devices can use only one type of SD card depending on the type of its storage slot. All SD cards operate at 2.7 volts to 3.6 volts.

Released in 2005, the micro SD card is the smallest card and also the most recent SD format. A micro SD card is 11mm long by 15mm wide by 1mm thick and weighs about half a gram. It has eight pins and no write protection.

The mini SD card was released in 2003 and is usually utilized in mobile devices. The mini SD is 20mm wide by 21.5mm long by 1.4mm thick and weighs about one gram. It has 11 pins and no write protection.

SD cards were first available in 1999 from Panasonic, Toshiba, and SanDisk and are the largest type of SD card. A normal SD card is 32mm long by 24mm wide by 2.1mm thick. It will weigh about two grams. It has nine pins and a write protection switch.

You don’t need a separate card reader for each type of SD card. There are card readers that have the ability to load files from your computer to each type of card and back again. Some adapters are the dimensions of SD cards and may hold either a micro SD card or a mini SD card. These are designed to plug into the built-in SD port on your computer. SD cards can also be used as a drive-by connecting the device holding the storage card to the computer.

Looking for the best memory card to buy for your camera? Then browse our website now to view our full range of memory cards from different brands like SanDisk, Samsung, Kingston, Integral, and Adata.