7 Wonders of the Ancient World 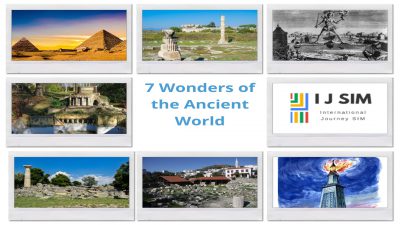 7 Wonders of the Ancient World are the “Ancient monuments” that apply to any historical, archaeological, artistic building, statue, cave, rock sculpture, inscription, or monolith, that has been in existence for at least one hundred years or has been destroyed due to natural calamities or by someone. The world is full of such amazing places. These ancient monuments represent the art and culture of that particular place. Usually, most of us get confused with ancient wonders and new wonders of the world. The new wonders of the world have been chosen by millions of people through a contest conducted by the new 7 wonders foundation in 2007.

At www.ijsim.com we have compiled the list of 7 ancient wonders of the world that we feel will help you for preparing your next vacation:

4.   Temple of Artemis at Ephesus (Turkey)

The Great Pyramid of Giza is a symbol of Egypt and the last of the seven wonders of the world. It is located on the Giza Plateau near the modern city of Cairo and was built for 20 years during the reign of King Gipps (2589-2560 BC, also known as Gipps) of the Fourth Dynasty. It is part of a group of three pyramids – Khufu, Khafra, and Menkaura. The largest one is the Khufu, known as the “Great Pyramid”, which spans 13 hectares and is believed to contain more than 2 million stone blocks weighing between two and 30 tonnes. For more than 4,000 years, Khufu has been the tallest building in the world. It took modern humans until the 19th century to build taller structures. Scientists believe the Egyptians used rollers and sleds to move rocks in place. The sloping walls, designed to mimic the rays of Ra, the sun god, were originally constructed as stairs and later filled with limestone. The inside of the pyramid includes narrow corridors and hidden spaces to try to prevent grave robbers but fails. Although modern archaeologists have found some of the great treasures among the ruins, they believe that most of the pyramids that ever existed were looted within 250 years of their completion. The Great Pyramid is the tallest man-made structure in the world ever. It has a record of more than 3,000 years and is unlikely to break.

According to ancient Greek poets, the Hanging Gardens of Babylon near the Euphrates in what is now Iraq was built around 600 BC. Built by Babylonian King Nebuchadnezzar II. The garden is said to have been planted 75 feet in the air on a large square brick deck built over a theatre-like staircase. The king is said to have styled the towering gardens to dispel his beloved Amitis’ nostalgia for the natural beauty of his home in Media, northwest Iran. The author then describes how people can walk under beautiful gardens that are supported by tall stone pillars. Modern scientists conclude that to survive, parks must be irrigated with a system consisting of a pump, waterwheel, and reservoirs to transport water from the Euphrates to several feet in the air.

3.   Statue of Zeus at Olympia

The famous statue of Zeus, king of the gods in Greek mythology, was made by the Athenian sculptor Phidias and was completed around the middle of the 5th century and placed in the Temple of Zeus in Olympia, the site of the ancient Olympics, BC. The statue depicts the god of thunder, shirtless on a wooden throne. On the armrests of the throne stand two sculptures of the sphinx, a mythical creature with the head and chest of a woman, the body of a lion, and the wings of a bird. Zeus statue decorated with gold and ivory. At forty feet tall, he was so tall that his head almost touched the top of the shrine. According to legend, the sculptor Phidias Zeus asked for approval after the statue was completed; immediately after, the temple was struck by lightning. The statue of Zeus was decorated at the temples in Olympia for more than eight centuries. At that time, the statue was moved to a temple in Constantinople, which is believed to have been destroyed in a fire in 462.

4.  Temple of Artemis at Ephesus

The original Temple of Artemis was designed by Cretan architect Chersifron and his son Metagenes and decorated by some of the most famous artists in the ancient world. The building caught fire on July 21, 356 BC. According to legend, on the same night, Alexander the Great was born. He was burned by a Greek citizen named Herostratus who claimed to have burned this miracle to make his name known in history. He was murdered and the government forbade his name to be spoken.

About six years later, the construction of the new Temple of Artemis began. The new building is surrounded by marble steps leading to a terrace that is more than 400 feet long. Inside stands 127 60-foot-high marble pillars and a statue of Artemis, the Greek goddess of hunting. Archaeologists disagree on whether the building has an open ceiling or is covered with wooden tiles. The temples large were destroyed by the Ostrogoths in AD 262. It wasn’t until the 1960s that archaeologists unearthed the ruins of the first temple column at the bottom of the Keister River.

This large tomb is made entirely of white marble and is believed to be about 30 meters high. The design of the building complex, which consists of three layers of rectangles, could be an attempt to reconcile Lycian, Greek, and Egyptian architectural styles. The first layer is a 60-meter long platform, followed by a middle layer consisting of 36 ionic columns and a stepped pyramidal roof. At the top of the roof is a tomb decorated with the work of four sculptors and a twenty-foot-high marble four-toed cart. It is believed that the tomb was mostly destroyed by an earthquake that happened in the 13th century and its remains were later used to fortify the castle. In 1846, fragments of one of the mausoleum trails were extracted from the castle and are now found in the British Museum in London along with other relics of Halicarnassus.

The Colossus of Rhodes is a large bronze statue of the sun god Helios, created in the 3rd century BC. It was built by Rhodesian for 12 years. The city was in the early 4th century BC. BC was hit by the Macedonian siege. and legend has it that the Rhodians sold tools and equipment left by the Macedonians to pay the giants. The statue, designed by the sculptor Chares, is 100 feet tall in ancient times. It was created around 280 BC. Chr. Done. and stood for sixty years until it was destroyed by an earthquake. It has never been restored. Most believed that the sun god stood naked raising a torch with one hand and holding a spear with the other. It used to be believed that the statue had one leg on either side of the harbour, but most scholars now agree that the statue’s legs were likely built side by side to support its enormous weight.

The Alexandria lighthouse is said to be located on a small island near the city of Alexandria. The Lighthouse was designed by Greek architect Sostratos and believed to be completed around 270 BC. During Ptolemy II’s reign, lighthouses helped guide ships on the Nile to and from the city’s busy ports. Archaeologists have found ancient coins depicting lighthouses and concluded that the structure has three levels: a square level below, an octagonal level in the middle, and a cylindrical top. On it stands a 16-meter statue, most likely Ptolemy II or Alexander the Great, as the city was named. Although the estimated height of the lighthouse is between 200 and 600 feet, most modern scientists believe it was about 380 feet high. It is believed that due to the earthquake from 956 to 1323 the lighthouse was gradually destroyed. Since then, several of his remains have been found at the bottom of the Nile.

Modern 7 Wonders of the world

In 2007, the New 7 Wonders Foundation held a competition to name the New 7 Wonders of the World. Tens of millions of people vote on the list of UNESCO World Heritage Sites. They cover four continents and attract thousands of tourists every year. They:

If you’re planning a trip to either of these places anytime soon, you can carry an international SIM card with you. With www.ijsim.com it is easy to purchase international SIM Cards. They are easy-to-use Prepaid, preloaded SIM cards. No Roaming charges, No hidden fees. Easy to stay in touch and create memories.