11 Of The Best Indian Restaurants In London 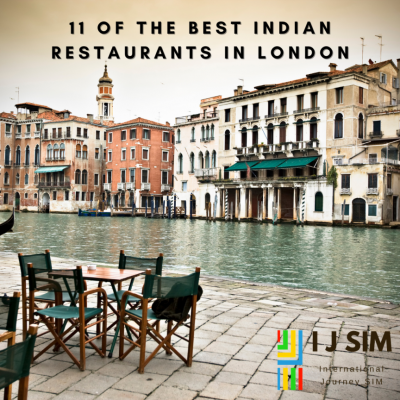 Do you know? In London alone, there are more Indian restaurants than in Mumbai and Delhi combined. Chicken Tikka Masala is England’s most popular Indian dish. The other popular dishes are Butter Chicken, Rogan Josh, Malai Kofta, Chole, curry, etc. In this blog, you will know about The Best Indian Restaurants In London.

Gymkhana has held a Michelin star since 2014 for its classic and contemporary Indian cuisine. Gymkhana is inspired by the elite clubs of India where members of high society socialise, eat, drink, and play sport. Throughout the restaurant, the interiors are elevated by an array of original Gymkhana features including hunting trophies from the Maharaja of Jodhpur and Grandmother Sethi’s barometer.

Trishna was awarded a Michelin Star in 2012. Located in the heart of London’s Marylebone Village, Trishna delivers a contemporary taste of Indian coastal cuisine, and an extensive wine list that focuses on emerging regions and fine wines from niche producers and boutique wineries from all over the world.

Jamavar London was awarded its first Michelin star within a year of its opening, in October 2017. Jamavar’s Mayfair restaurant menu showcases his love of dishes from both the Royal kitchens of Northern India and the coastal cuisine from the Southern states, exploring pan-Indian flavours using a range of authentic cooking techniques.

Cinnamon Kitchen opened it has established itself as one of the finest modern Indian restaurants in London. The high-energy, theatrical dining room, with its open tandoor grill, offers an interactive dining experience that is as memorable as the food. Cinnamon Kitchen continues to challenge the status quo by fusing the spice of the subcontinent with the finest British ingredients and culinary traditions to create modern dishes that remain classic and timeless.

Lucknow 49 aims to be a local staple in the heart of Mayfair, providing an unexpected respite from the area’s formal business lunches. The kitchen will serve Awadhi cuisine (Mughlai Kawabs, Biriyanis & curries) native to the Indian city Lucknow, with fresh seasonal ingredients that celebrate the heritage of the Mughal Empire.

Gunpowder was awarded the Michelin Bib Gourmand immediately following the opening of the first restaurant in 2015. Gunpowder is a home-style Indian kitchen that showcases the vibrant, bold flavours of the subcontinent though responsibly sourced ingredients. Its menu is a modern interpretation of the family recipes. Gunpowder has two restaurants in the heart of London. The first is next to the original Spitalfields Market in the City of London and the second overlooks the iconic Tower Bridge.

Dishoom is a small group of Indian restaurants initially based in London, England. The first cafe opened in Covent Garden in 2010. As of 2020, there are eight cafes open around the United Kingdom, with locations in London, Edinburgh, Manchester and Birmingham. One of its popular dishes is Chicken Berry Britannia – The Dishoom variation on the legendary Irani café special, with cranberries.

Soho Wala is a stunning new eatery offering the most sumptuous in Indian street food that will be designed to transport the palate and excite the senses. The term ‘Wala’ (pronounced ‘Valla’) is commonly used across Indian trading to describe a merchant or seller of the finest fare.

Brigadiers reference Indian art deco design, conveying the opulence and familiarity reflective of quintessential Indian Club Culture. Its Inspired by the army mess bars of India, where military regiments go to eat, drink and socialise, Brigadiers accommodates 140 covers internally with a further 34 on an outdoor terrace. The food offering focuses on different methods of Indian barbecue, utilising tandoors, charcoal grills, rotisseries, wood ovens and classic Indian smokers. The drinks offering marries together the food and social spirit of the restaurant with beer, whisky, cocktails on tap and large serves.

*All the images are taken from google directly. All attention has been paid that no copyrights images are copied. however, if you find any, please let us know and we will remove or replace them.